How to Convert Spotify to FLAC Losslessly [Latest Tutorial]

Despite the fact that Spotify encodes all its songs in OGG Vorbis format, the platform also prevents people from downloading them to audio files of popular formats to facilitate more convenient offline music streaming. Even turning to some popular Spotify Music Converter to help, the compression methods utilized in the programs would result in lower-quality songs outputs.

Therefore, this post would focus on helping people to convert Spotify to FLAC, a lossless audio codec to save Spotify Music for offline stream back. If you also need such assistance, please scroll down and continue on reading.

MuConvert Spotify Music Converter also facilitates higher productivity in converting Spotify through providing some efficient features, including the 5X faster conversion speed and batch convert feature. The easy manipulation of the program also helps a lot in attributing to the improved efficiency, too.

Conclusion of the Program Highlights 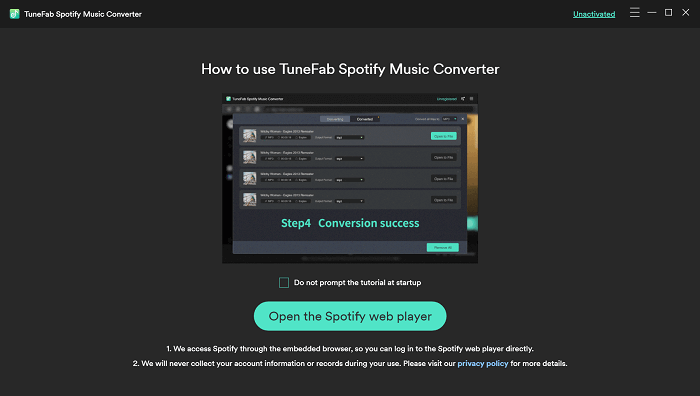 Equipped with an easy UI design, MuConvert Spotify Music Converter takes pretty simple manipulation to control the Spotify to FLAC conversion. In the following, the procedures will be showed in detail.

Currently, MuConvert Spotify Music Converter provides Windows and Mac versions. The program offers the free trial for double-checking your demands before making the purchase. Therefore, please install the program for free by clicking on the Try It Free button provided for corresponding system below.

When MuConvert Spotify Music Converter is installed and opened on your computer, please enter the main feed of the built-in Spotify Web Player for signing in with your Spotify account. 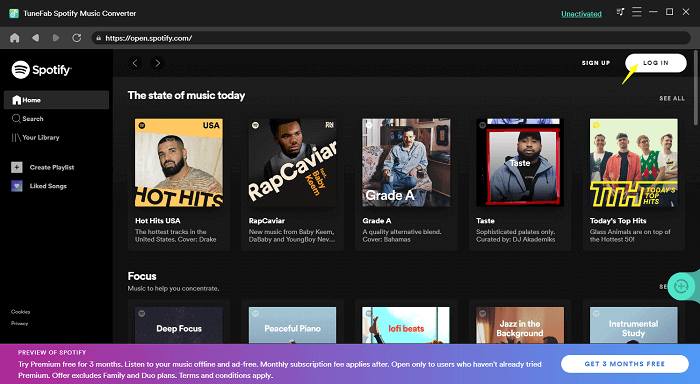 As signing in your Spotify account in MuConvert Spotify Music Converter's Spotify Web Player, please open a playlist and tap the green plus button for analyzing the whole song list. Just a moment, MuConvert Spotify Music Converter will detect all the Spotify songs contained in the list and allows you to select the items you wish to convert to FLAC.

MuConvert Spotify Music Converter allows people to control the parameters of the outputted Spotify songs. By going to Preferences >> Advanced, you can select FLAC as the output format. Despite this, the Sample Rate and Bitrate are both adjustable by yourself. 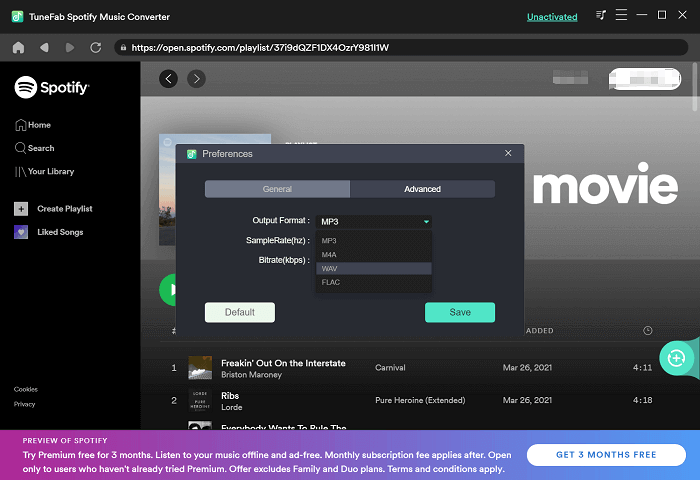 When the output settings also complete, you can initiate the conversion process by tapping the Convert All button. Subsequently, all your selected Spotify songs will start being converting to FLAC and saved on your computer. You can access the downloaded items in Finished >> View Output File.

Some people may ask whether they have an alternative option to download Spotify to FLAC online without installing third-party software. For these users who prefer an online program to get the Spotify songs converted, here we collect a trustworthy platform, Online-Convert.

Online-Convert is maintained with the easy-using function and speedy performance to convert Spotify to FLAC without the requirement to install any program or add-on. Through these several simple procedures, you can quickly get the Spotify songs converted to FLAC audio files for having the free music streaming offline. In the following, we will see how it works.

The above two parts have showed you the ways to convert Spotify to FLAC utilizing both professional desktop software and online program. Let's extend the reading with the popular FAQs raised by other people to get more comprehensive knowledge about FLAC format.

FLAC (Free Lossless Audio Codec) refers to an audio codec utilizing lossless compression method. Compared to MP3 format, FLAC delivers higher quality in presenting better audio effect to audiences. However, the file size will occupy larger space as a price paid for such higher audio quality. However, thanks to the lossless compression applied, FLAC format can offer bit-perfect copies of CDs but at half the size than them.

Unfortunately, Spotify doesn't support to upload and stream back FLAC local files in the platform or software, but MP3 or M4A formats are supported. Therefore, if you wish to play local audio files in Spotify, you need to convert the FLAC files to MP3 or M4A for importing again.

Thanks to the lossless attribution of FLAC format, people could retain the original music streaming experience by converting Spotify to FLAC. Both desktop and online methods are provided in this post to help figure this issue out. Now, enjoy your Spotify music journey in more flexible ways!